Seawolf 326, Bureau number 622032, while parked in revetment at the Chau Doc Operating Base, was struck by the aft rotor blades of a US Navy CH-46 that was landing at the POL. A large section of the main rotor blade was ripped off and the aircraft was airlifted out by a US Army CH-47 the next day, repaired, and returned to service as was the UH-46. Though shrapnel was thrown extensively around the pad, there were no personnel casualtues. 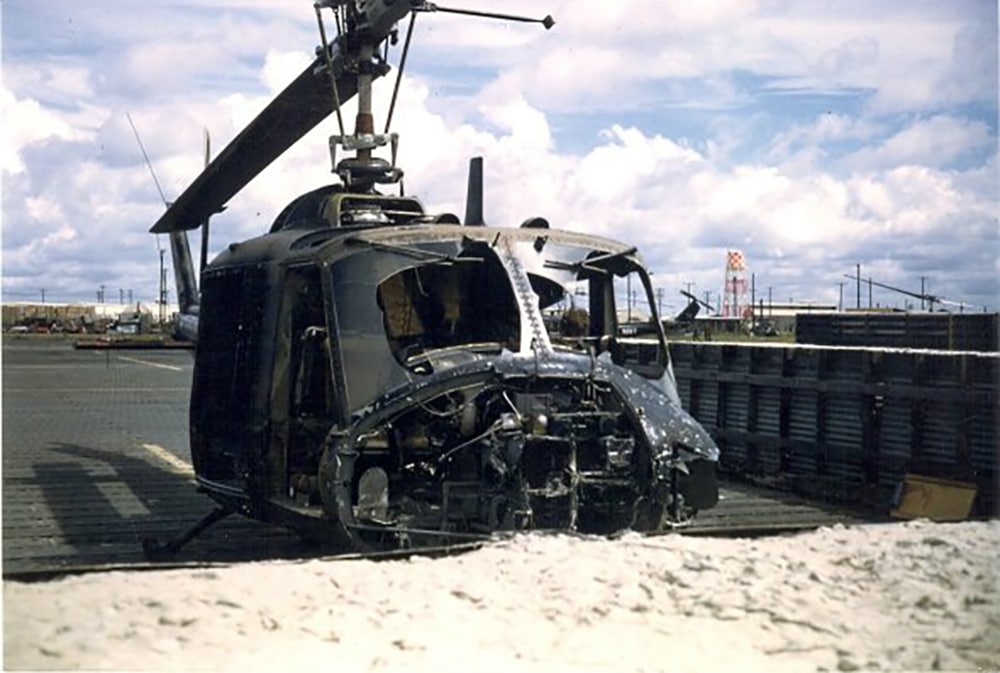 HC-1 Det 25, was escorting a Patrol Air Cushion Vehicle(PACV) and 63-12946 crashed when it lost lift after apparently encountering turbulence generated by the PACV's propeller and lift fan. PACV #2 can be seen in the background.

Lifting the aircraft out of the water to return to base.

Assigned to Det 7 Destroyed on impact with dike near Dong Tam due to loss of rotor RPM, no casualties 11/16/70.

Sealord 6 crashed on takeoff at Binh Thuy on 13 August 70. Story Below.

On Aug 13, 1970 the pilot was lifting HH-1K 157856 off of a very small landing pad that was adjacent to the Seawolf Flight Ops trailer at Navy Binh Thuy. The small pad was made of the old WWII / Korea type perforated steel plating (PSP) with the small round holes in it. The pad was just a few feet East of the main runway at Navy Binh Thuy and immediately West of the Seawolf Flight Ops trailer, which was just West of the Yellow Seawolf hanger. As the pilot lifted off, one skid became caught in the PSP. The pilot must have made the natural reaction which is to apply full lateral cyclic, but once one skid is about 7 inches above the other, with a fixed hinge point on the lower (caught) skid, the only way to prevent dynamic rollover is to lower the collective. This is because the lateral control margin has become inadequate to recover. Apparently the collective was not lowered, thus the aircraft instantly flipped over, thrashed itself, and ended up on it's side on the runway, minus it's rotor blades.

At the time of the accident I was in my 2nd floor barracks room and heard a very loud "bang". Looking out my door I could see a helicopter blade sticking out of the side of my barracks. I concluded there had been a crash and I ran full-tilt towards the runway and was at the crash site within 1 to 2 minutes maximum and checked out the crew who were all OK. Of course a crowd quickly gathered as maintenance personnel and others poured out of the Seawolf hanger.

Sealord 11 went down while the crew was trying to pick up something with the door hoist. When the load got out of control the crews tried to cut the cable, but the cutting mechanism did not cut the cable and the aircraft went down into the water. The SEALS went out with a Chinook to retrieve it. During the transport back to Binh Thuy, the turbine and transmission fell off. These photos show the A\C at Binh Thuy next to the runway just east of the control tower and fire station.

Seawolves Down at Dong Tam

Exerpted from the book Fire From The Sky by Richard C. Knott Naval Institute Press, Annapolis, Maryland Reprinted with permission of the author.

26 March 1969 was a difficult day for HA(L)-3. It began shortly after midnight when Viet Cong forces began a heavy motor attack on Dong Tam, from which Det's 4 and 6 were staging. As crews attempted to get airborne, mortar rounds hit an ammunition dump nearby, which went up in a tremendous explosion. The ear-splitting blast of twenty-two tons of minutions engulfed the two helicopters as they were taking off.

Door gunner ADJ-2 Vincent G. (Vince) Paone was part of the Det-6 duty crew that night and was outside when the attack began. He watched transfixed as several mortar rounds landed in the ammunition dump next to the parked helicopters and said to fire team leader LTJG Robert J. Romanelli, "that thing's going to go!" Romanelli replied, "Let's get the birds out of here before it does!"

The two duty crews ran to the aircraft and started cranking. Romanelli's helicopter was first off, but just as the chopper lifted into the air, the dump exploded. Paone remembers:

"The shock wave flipped us on our back as if the aircraft was a toy, and we came down hard. We were all shaken badly and had minor injuries, but out co-pilot, LTJG Dave Heater, was pinned under the aircraft. To make things worse, the fuel tank had ruptured, and there was jet fuel everywhere. Ammunition in the dump was still cooking off, and fire was falling from overhead. We were afraid it would touch off the fuel, and Heater would be burned alive. Mike O'Brien, the other door gunner, and I grabbed fire hoses and tried to wash down the area around the aircraft until we could get Heater out of there."

The wing helicopter never got off the ground and was demolished by the explosion. The co-pilot, LTJG Alfred A. Suhr, was killed. He had reported to the detachment only about three weeks before.

LTJG William M. (Woo) Ferrell was an off duty Det-4 pilot. The detachment's two aircraft and duty crews had been dispatched to Moc Hoa the day before for anti-infiltration operations near the Cambodian border and had not yet returned.

Ferrell was standing by the door of the Det-4 bunker when the attack began. Someone shouted for him to get out of the door, and he did. An instant later the door was blown across the room. Ferrell recalled, "It was a huge boom." Fortunately, the door did not hit anyone, but people who had been standing found themselves on the floor, surprised but unhurt.

Once on his feet, Ferrell ran outside along with everyone else to be met with the sight of one helicopter upside down and another that seemed to be crushed. The pilot and crew members were dragged out of the latter aircraft, but the copilot was already dead. He had been hit by a piece of shrapnel, which had also torn off the main rotor. He had died instantly.

The other helicopter was on it's side, and Heater was still pinned under the wreckage by one leg. Ferrell dug furiously under Heater while others tried to lift the aircraft so he could be pulled free, but to no avail.

The whole area was flooded with fuel, and burning debris was falling all around. It was literally raining fire. A couple of people were trying to wash the fuel away with fire hoses. Someone came running up with a fire axe, which was not much good for anything, but Heater saw it and thought someone was about to chop off his leg. Of course he voiced some strong objections.

Meanwhile, Romanelli went around to the tail of the aircraft and called for people to help him push down on the tail stinger. When they did so, the nose came up and Ferrell pulled Heater free.

In spite of the shower of shrapnel and exploding munitions, Seawolves ignored their personal safety to help their injured comrades. Door gunner ADJ-2 Dale Odum, who had been in one of the bunkers, was also knocked flat by the explosion, but picked himself up and ran outside to help. He was one of the men who rescued Heater.

A fire truck arrived on the scene and hosed down a large metal ready-box nearby that was full of rockets. That kept it from exploding from the heat and falling debris. Later, it cooked off anyhow and left a deep crater not too far from the bunkers. The next day, there were all kinds of ordinance strewn about. It was a sombering scene of devastation. In addition to the two Det-6 birds, a non-flyable Seawolf helicopter that was waiting to be heavy-lifted out was also destroyed.

Vince Paone and Mike O'Brien each received a Silver Star for their courage that night, as did three others. Several more received Bronze Stars with combat "V."