Excerpted from the book Fire From The Sky by Richard C. Knott
Naval Institute Press, Annapolis, Maryland
Reprinted with permission of the author.

6 March 1969 was a difficult day for HA(L)-3. It began shortly after midnight when Viet Cong forces began a heavy motor attack on Dong Tam, from which Det's 4 and 6 were staging. As crews attempted to get airborne, mortar rounds hit an ammunition dump nearby, which went up in a tremendous explosion. The ear-splitting blast of twenty-two tons of minutions engulfed the two helicopters as they were taking off.

Door gunner ADJ-2 Vincent G. (Vince) Paone was part of the Det-6 duty crew that night and was outside when the attack began. He watched transfixed as several mortar rounds landed in the ammunition dump next to the parked helicopters and said to fire team leader LTJG Robert J. Romanelli, "that thing's going to go!" Romanelli replied, "Let's get the birds out of here before it does!"

The two duty crews ran to the aircraft and started cranking. Romanelli's helicopter was first off, but just as the chopper lifted into the air, the dump exploded. Paone remembers:

"The shock wave flipped us on our back as if the aircraft was a toy, and we came down hard. We were all shaken badly and had minor injuries, but out co-pilot, LTJG Dave Heater, was pinned under the aircraft. To make things worse, the fuel tank had ruptured, and there was jet fuel everywhere. Ammunition in the dump was still cooking off, and fire was falling from overhead. We were afraid it would touch off the fuel, and Heater would be burned alive. Mike O'Brien, the other door gunner, and I grabbed fire hoses and tried to wash down the area around the aircraft until we could get Heater out of there."

The wing helicopter never got off the ground and was demolished by the explosion. The co-pilot, LTJG Alfred A. Suhr, was killed. He had reported to the detachment only about three weeks before.

LTJG William M. (Woo) Ferrell was an off duty Det-4 pilot. The detachment's two aircraft and duty crews had been dispatched to Moc Hoa the day before for anti-infiltration operations near the Cambodian border and had not yet returned.

Ferrell was standing by the door of the Det-4 bunker when the attack began. Someone shouted for him to get out of the door, and he did. An instant later the door was blown across the room. Ferrell recalled, "It was a huge boom." Fortunately, the door did not hit anyone, but people who had been standing found themselves on the floor, surprised but unhurt.

Once on his feet, Ferrell ran outside along with everyone else to be met with the sight of one helicopter upside down and another that seemed to be crushed. The pilot and crew members were dragged out of the latter aircraft, but the copilot was already dead. He had been hit by a piece of shrapnel, which had also torn off the main rotor. He had died instantly.

The other helicopter was on it's side, and Heater was still pinned under the wreckage by one leg. Ferrell dug furiously under Heater while others tried to lift the aircraft so he could be pulled free, but to no avail.

The whole area was flooded with fuel, and burning debris was falling all around. It was literally raining fire. A couple of people were trying to wash the fuel away with fire hoses. Someone came running up with a fire axe, which was not much good for anything, but Heater saw it and thought someone was about to chop off his leg. Of course he voiced some strong objections.

Meanwhile, Romanelli went around to the tail of the aircraft and called for people to help him push down on the tail stinger. When they did so, the nose came up and Ferrell pulled Heater free.

In spite of the shower of shrapnel and exploding munitions, Seawolves ignored their personal safety to help their injured comrades. Door gunner ADJ-2 Dale Odum, who had been in one of the bunkers, was also knocked flat by the explosion, but picked himself up and ran outside to help. He was one of the men who rescued Heater.

A fire truck arrived on the scene and hosed down a large metal ready-box nearby that was full of rockets. That kept it from exploding from the heat and falling debris. Later, it cooked off anyhow and left a deep crater not too far from the bunkers. The next day, there were all kinds of ordinance strewn about. It was a sombering scene of devastation. In addition to the two Det-6 birds, a non-flyable Seawolf helicopter that was waiting to be heavy-lifted out was also destroyed.

Vince Paone and Mike O'Brien each received a Silver Star for their courage that night, as did three others. Several more received Bronze Stars with combat "V." 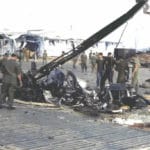 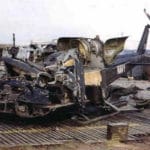