The SEAWOLVES from Det-4 were "SCRAMBLED" for support of the River Boats and Vietnamese Army that were doing a sweep near the Parrot's Beak close to the Cambodian border and ran into a bit of trouble. As always, the trail bird took off first to cover the lead on take off. Not long after take off, while climbing to 400-600 feet, covering the lead on take off, something went horribly wrong.

I felt a thud, then a shudder on my side-starboard. I looked aft and saw a huge fire and felt the helo pitch to the port side to a 30+ degree pitch. Mr. Ammendola immediately put out a "MAYDAY-MAYDAY-SEAWOLF DOWN" call! Slow motion set in, what took a matter of less than 30 seconds, seemed like an eternity.

As a helicopter gunship crew, we all had designated jobs to do in case of emergency besides pray and breathe. Pilots fly, call MAYDAY, and give position, etc. Gunner's assess situation, help pilot if needed, prepare for hard landing by tossing out any on board objects that could become airborne and cause further problems for the crew.

At the point of the helo shuddered and pitched to port, every warning light on the instrument panel was flashing, every audible warning going off in your helmet. So much to do and so little time! Damn, this wasn't good, been here before, but not the same. Too many lights flashing, to many warnings in my helmet, over speed, overtemp! FIRE! FIRE!! "MAYDAY! MAYDAY! SEAWOLF GOING DOWN!" Not good at all! MAYDAY! MAYDAY! I don't like this, this does not feel right, I didn't think, I acted, I re-acted, something was wrong, pitch much steeper to the port side, speed increasing! I grabbed the 50 Cal and swing the barrel aft, barrel between helo and sagamie mount.

I hooked my finger through the rocket pod jettison, gotta get rid of weight! I looked at Sgt. Ninh sitting on the mini-gun ammo tray. We made eye contact, we smiled at each other. I made eye contact with "Lil John", gave thumbs up to jettison rocket pods at same time! He gave thumbs up, we rolled harder to port! I looked to my right and saw tops of palm trees just under our skids. God, please don't let us crash right in the middle of the village. I froze, I looked back at "Lil John", both hands up in the air, I let go of the jettison ring. Lil John couldn't jettison his rocket pod! His pod had shifted with the last pitch to port. Later at the debriefing it was theorized that the roll pitch of the helo had caused the port rocket pod to roll past release and jammed the release and that if I had jettisoned my pod we may have rolled harder to port and crashed inverted.

We, the gunners, smile as calm sat in. No time, too many flashing lights, too many audible warnings, tightened the belt harder. With my right hand on the 50 Cal, I pushed it down hard and prepared for impact! We braced ourselves! Peace and calm came over me. I was ready. We were going to crash hard! We are going to hit near the river in nipa palm! This is not good! We would invert! I was ready!

We were down! I was looking out my door as if we were set down by a gentle hand on a bed of feathers. No sounds, eerie quiet, everything OK to my right. I have to make myself look right. I see Lt. Ammendola, Lt. Troung, Sgt. Ninh, Lil John. REAL TIME BACK! REALITY-"FIRE FIRE"! Exit helo! I jumped out and landed in palms near the river. We were all out, we made it. The fire was out, and the blades were fore and aft as if they were to be tied down. All was quiet. The lead aircraft was overhead providing cover.

I swam back to helo, climbed in, and grabbed the radio. "SEAWOLF,SEAWOLF," I yelled, is that you "FREAK?" Hell yes, we are all alive, come and get us. The SEAL's suited up and loaded into LSSC boat. They came to our location and loaded us up to take us back to base. After they unloaded us they returned to the helo and set up a secure perimeter for the night.

When we arrived back at Ben Luc there were hugs all around. They said we looked like a ball of fire falling from the sky after the debriefing, which was and seemed like a joyous fog of adrenaline rushing through the body. Not until we were showering and crying and laughing that the truth finally hit home, it made the ol' knees weak!

All during the debriefing and in the shower I kept praising Mr. Ammendola on the excellent job of flying, being so cool, getting us down and home safely. Finally, Mr. Ammendola grabbed me by my shoulders and for the first time it sunk in through all the joy. He looked me straight in the eye and said, "Mike, I had no control over the helo! I had no control!" It got so quiet and my knees got weaker. Then this calm, warm feeling generated through me and the rest of the crew and we all cried with joy. I finally understood. We all had been saved by a higher calling. We had dogged the big one.

The reality of the situation was that we had taken a hit through the fuel line, through the engine and fell to the ground. Mr. Ammendola had no or limited control, yet I've never landed or even stopped in a car that easy, with no motion, back and forth-since that night.

The helo was lifted out the next day, engine changed, holes patched, test flown and she was ready to fly with another SEAWOLF CREW. 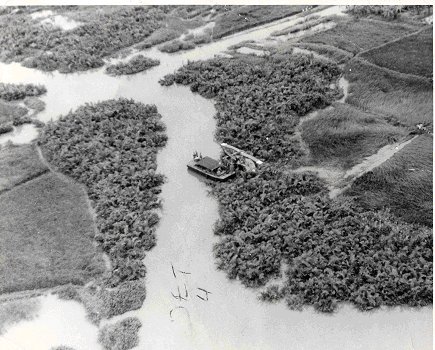