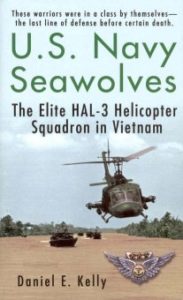 In the Viet Cong-infested Mekong Delta, where small SEAL teams were always outgunned and outnumbered, discovery brought swift, deadly consequences— and a radio call for backup from the United States Navy’s very best: the Seawolves. The whir of approaching rotor blades signaled their arrival as they tore through the jungle at treetop level, gunners hanging off the skids, shooting M-60s, raining down their lethal mix of high explosives and incendiary death.

Seawolf Dan Kelly describes the origins of this extraordinary outfit. Put through a training program unlike any other, these men emerged to perform unparalleled feats of courage. The stories of these elite warriors capture America’s real heroes in all their guts and glory, and demonstrate why the Seawolves are known as the most successful and most decorated unit in the Vietnam War.