The last days at Binh Thuy were used to prepare all the Hueys for transport via C-130 and C-141 to CONUS. We had to clean all the aircraft inside and out to insure they would pass Department of Agriculture inspection. This was to make sure all the bugs accumulating from the years of jungle living were dead and gone. Once all the aircraft were thoroughly cleaned and en route to CONUS, we could turn the lights out and go home. As one of the squadron maintenance officers, I was given this antiseptic detail. We were given 6-8 weeks to accomplish this cleaning mission. However, all the maintenance personnel knew that as soon as the cleaning on the last aircraft was complete, we could leave. So, in typical Seawolf fashion of can do and teamwork, we finished the chore in 3 weeks. One item of interest, was that we did with many of the tools and weapons left over after all the aircraft left. We simply dumped them in the Bassac River.
The Dets were slowly closed down by bringing one gunship into home plate and then sending the other as a cover gunship to another Det. In this way, one by one each Det was closed until there was only one Seawolf gunship remaining. The CO, Cdr. Bill Mulcahy was the pilot of this final aircraft. We at Binh Thuy all knew when he was due in, so the whole maintenance crew and most of the rest of the squadron went out to the runway to view the LAST FLIGHT.

The squadron duty officer was able to pipe the radio transmission from the CO to the loudspeaker outside. In this way all of us were able to hear the Huey inbound and all radio transmissions. Men stationed on either side of the runway popped different colored smokes when the helo was inbound, and the wind was pretty calm so the smoke slowly drifted skyward. The Huey gunship came in high and fast, making a rocket run toward the runway. When the skipper passed though the smokes, all the different colors were blended together making an eerie sight. The Huey pulled up at high speed and it almost looked as though the pilot was going to do a loop. He made one more pass through the smoke, and then touched down to a roar of applause from the crowd. This was the final flight of Helicopter Attack (Light) Squadron Three.

A note of interest was the activity of the gunner during the last run on Binh Thuy. Many of the men on the ground were taking pictures of this great event in the annals of Naval Aviation History, and in one of those picture, there is a clear vision of the gunner mooning us. I saw this picture later, but don’t remember who had it. However, this picture would sure make a great addition to the squadron memorabilia collection.

Editors note: If anyone out there has a copy of this photo, please let me know. It would be a crime if it were lost to posterity! 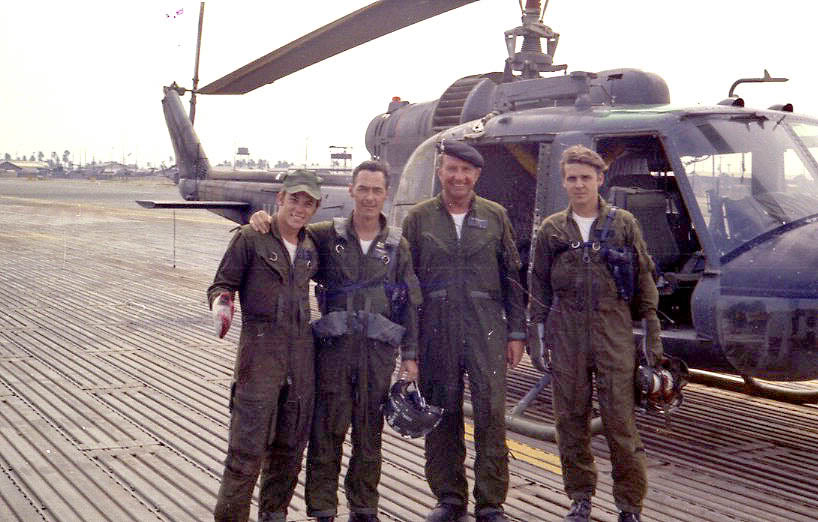