How would you respond if a helicopter landed on your roof and the pilot asked for six “nails”, six “proxies”, and a couple of “Wilson Picketts?” 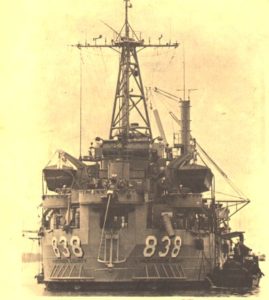 Sailors aboard the tank landing ship USS Hunterdon County (LST-838) supplied these specialties daily along with a formidable array of other weapons and materials to their customers on the Mekong Delta in the Republic of Vietnam. Some of their customers flew while others floated.

“Nail,” “Proxie,” and “Wilson Pickett” are nicknames for the Fleshette, Proximity and White Phosphorus air to ground rockets commonly used by combat helicopters. Also frequently used is the ordinary high explosive (HE) rocket.

The Hunterdon County was the first US ship to cross the Cambodian Border, May 12, after President Nixon’s decision to enter that country. It remained there and continued to provide support to the Vietnamese armed forces and their US Army and Navy advisors longer than any ship of it’s type, according to Navy Officials. On June 6, it sailed to the Philippines for 30 days repair and replenishment.

Since her arrival in Vietnam in 1967, the Hunterdon County’s duties were twofold. First, with a helicopter landing pad on the main deck, she was used as a helo refueling and rearming station. In this capacity, the crewmen of the Hunterdon County executed a record of 5,000 consecutive accident-free helicopter landings. That record grew steadily in Cambodia where the ship resupplied as many as 40 “birds” a day.Loading Rockets 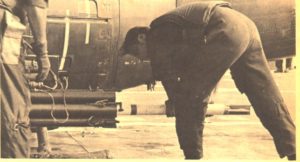 They serviced helicopters of the Vietnamese Air Force besides the US Navy “Seawolf” and Army “Cobra” gunships. In addition to rearming automatic weapons and refueling, the ship also resupplied the helos with a variety of folding fin 2.75 inch air to ground rockets.

The second half of the Hunterdon County’s mission involved resupply of allied navy gunboats in the waterways of Vietnam.

It provided the Vietnamese Navy river craft with everything from fuel and food to canned soft drinks in the recent Cambodia operations.
Landing 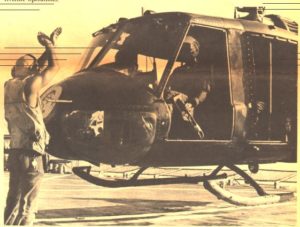 The ship’s credits include assisting in capturing one of the largest Viet Cong caches in the Delta on March 29, 1969. She established the record for the furthest transit of the Bassac River by a United States commissioned vessel in August of that same year.

The Hunterdon County, 327 feet long and carrying a crew of 135 men, is commanded by LCDR Warren H. Fischer of Santa Rosa, California. He is assisted by LT Jack L. Clark of Loogootee, Indiana, the ship’s executive officer.