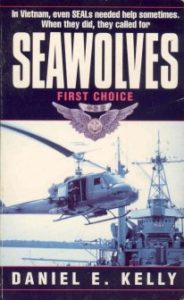 This is the story of one of those men. . . .
Taking enemy fire while braced against the rocket pod of a Huey gunship and shooting an M-60 freehand in 110 mph winds was just part of Dan Kelly’s job in Vietnam. As a gunner in the all-volunteer Seawolves, he served with distinction until three bullets bought him a trip home. Here is his amazing story of the Seawolves–a harrowing tale of unsung heroism and undaunted courage in combat.