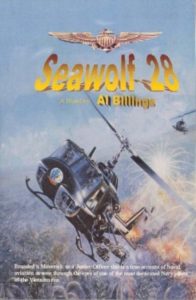 Seawolf 28 is an exciting action filled novel about one of the most decorated Naval Aviators of the Vietnam Era. It brings the reader a dramatic story about the twenty-two year career of a Navy Helicopter Pilot. By the end of the Vietnam War, “Hollywood Al” was a four tour veteran with well over 600 missions and the recipient of forty medals and citations, including the Silver Star and Distinguished Flying Cross. The story spans the gamut from a young cadet full of exuberance with high ideals, nine engine failures, dozens of life threatening incidents and hair raising combat stories, to his biggest battles challenging senior officers to do what was right, at the risk of his own career. Throughtout his flying career he qualified in over 20 different aircraft and rose from the enlisted ranks to squadron Commanding Officer of the oldest combat rescue squadron in the Navy.

This is a compelling story that will cause young people to think about duty, honor, and country. It will help them to understand the sacrifices that are needed to serve their country. This novel is not just another Vietnam combat action story. Seawolf 28 is a timeless, powerful, honest, and uncompromising first hand account of a true Maverick that knew no limits when it came to standing up for his men and what he believed in. What makes this novel stand out is the candid and frank portrayal of Naval Aviation, politics, and the true character of individuals under the most stressful times. For those who were there, it will remind them of the bonds that were formed only in times of conflict and bring back memories, both good and bad, of those who lost their lives in one of history’s most controversial wars. It is a must read for those who are thinking about joining the military or making it a career.