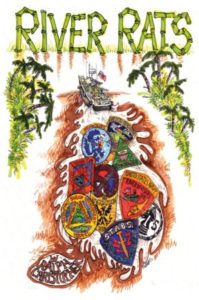 Christopher invites readers to step back in time to a land most young men knew little about when they found themselves defending freedom in South Vietnam. River Rats is an autobiographical account of his tour as a 20-year-old member of the “Brown Water Navy,” made up of small units that manned naval firebases and floating detachments and rode patrol boats alongside South Vietnamese troops, mercenaries and regional forces. These units were the first to intercept communist forces trying to transport weapons and supplies into the Republic of Vietnam via the Ho Chi Minh Trail. Christopher brings each page to life with vivid descriptions of government operations and day-to-day life that can only come from someone who was there to witness it firsthand. Readers see the overthrow of the Cambodian government and relive the grim realities of war as the bodies of Vietnamese refugees float past U.S. servicemen in the Mekong River. With no shortage of action and page-turning suspense, Christopher’s account puts readers squarely in the middle of the action.

“I am proud to bring you this important story of how the United States Navy severed the communist lines and defeated their armies, only to return home and watch the government give the war away many years later,” says Christopher. “The River Rats were held to a high standard and fought with honor alongside the free people of South Vietnam. They are the only men in the history of the Navy authorized to wear the black beret, and they won their part of the Vietnam War.”

From pre-war training and charging headlong into enemy fire aboard a patrol boat to visiting President Nixon in Washington and hearing the American outcry against the conflict, River Rats leaves no corner of the war unexplored.

After serving in Vietnam with the U.S. Navy, Christopher returned home to Virginia and attended classes at Virginia Commonwealth University. In 1982, he graduated from the Musicians Institute of Technology in Hollywood, Calif. He is now a veteran performer and recording artist. He lives with his family in Nevada and works with young adults, music and veterans affairs.