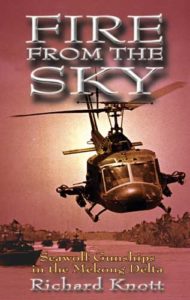 Fire from the Sky brings the Seawolf experience up close and personal. Gleaned from official and historic documents and colorful recollections of more than fifty Seawolf warriors, this dramatic account takes the reader from concept to the moment the last squadron commanding oficer turns out the lights. Some sixty photographs and drawings, many never before published, illustrate this landmark work.

Richard Knott retired from the US Navy in 1986 after a thirty year career and several thousand pilot hours in a variety of aircraft. He is a former editor of Naval Aviation News and The Naval Aviation Guide and the author of The American Flying Boat, Black Cat Raiders of World War II, and A Heritage of Wings.

Every two years, the Seawolves hold a reunion, a gathering of men who have been tested in combat and have not been found wanting. They come together to talk about an exceptional time in their lives, to renew old friendships, to relive old firefights, and to honor those of their number who gave the last full measure of devotion.

The gatherings are always large, because the Seawolves encompass groups of men who served at different times over more than a five year period. Most of the gunship crews belonged to the small, isolated detachments scattered throughout the delta and did not even know some of the other people who were in the squadron at the same time. But they all shared the same kind of unique experiences. Deadly combat brings with it a penetrating perspective: a sharper take on fear, courage, loyalty, comradeship, and death. They know things that most men do not, and it binds them together in an intimate brotherhood. Some stayed on in the Navy after Vietnam and served with distinction until retirement. At least two Seawolves attained flag rank. Most returned home, raised families and had noteworthy civilian careers. Some passed on and are sorely missed at the biannual gatherings. To many, it’s hard to believe that it all happened so long ago.

Most Seawolves are still living, still striving, still turning in that hundred and ten percent effort that characterized their contributions in Vietnam. Many are graying or balding, and more than a few have lost some of the spring in their step. Still, there is a hint of swagger in their walk and a lingering trace of panache in their manner that distinguishes them from others of their generation. Their guns are silent now, but to this day they are still Seawolves. Those who know the story understand why that is something special!