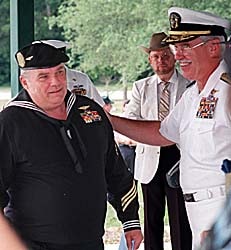 –DON BURK/STAFF…6/18/98…Earl Kennedy(L) gets congratulated by Rear Admiral KLevin F. Delaney at the awards ceremony in which 63 Combat Aircrew Insignia were presented.

Earl Kennedy (left) is congratulated by retired Rear Adm. Kevin Delaney at a ceremony where combat aircrew insignia were awarded.

Correcting what was described as a ”gross oversight” of three decades ago, the Navy awarded 63 Vietnam-era helicopter door gunners the combat aircrew insignia yesterday.

The insignias were awarded in a ceremony at Jacksonville Naval Air Station by retired Adm. Elmo R. Zumwalt Jr., who had promised the insignias 30 years ago. Zumwalt was commander of Navy forces in Vietnam from 1968 to 1970 and headed the Navy and sat on the Joint Chiefs of Staff from 1970 to 1974.

”It’s about time these heroes got recognized,” Zumwalt said of the men of Helicopter Attack Light Squadron 3. ”To think they didn’t get the authorization to wear the combat aircrew insignia until today is just an abominable thing.”

Retired Rear Adm. Kevin Delaney of Jacksonville, a former pilot with the squadron, said the Navy did away with the combat insignias in 1959, figuring the days of the tail gunners and door gunners who were eligible to wear them were past. ”Then, Vietnam came along, and once again we had door gunners,” he said.

Retired Capt. Dick Catone, another pilot, started lobbying the Navy 16 years ago to authorize the insignias.

He said the campaign plodded along and fell off track until about five years ago when it was revived with Delaney’s help and and pushed through the highest levels of the service.

”We waited a long time for this. We talked about it while we were over there,” said state Rep. Jim Fuller of Jacksonville, one of the squadron’s door gunners.

”I think for myself and all the other gunners over thereit’s a great tribute,” said Fuller, who was with the squadron from 1971 to 1972. ”We flew a lot of missions. We did a lot of good over there.”

The Seawolves, as the squadron is known, were a dominant force in the Mekong Delta, flying 78,000 missions, more combat flights than any other Navy squadron.

The Huey helicopters, armed with rockets and machine guns, provided air cover for the Navy SEALs and boats below.

Catone said that 500 former door gunners are eligible to receive the combat aircrew insignia. Only about 150 have been located, but the search will continue for the others or their families, he said.

Former door gunner Mike Dobson choked back tears during the ceremony, which included a reading of the names of 43 squadron mates killed, a rifle salute, the playing of taps and a helicopter flyover.

”It was very emotional,” said Dobson of Juno, Alaska.

”I think part of it was the sound of the rotors,” he said. ”That same sound was what gave the SEALs and the river boats their rise . . . When they heard those rotors, they knew not only were we on the way, but we wouldn’t leave.”

Retired Petty Officer Earl Kennedy of Poway, Calif., said it was especially significant that Zumwalt personally handed out the insignias.

”Adm. Zumwalt originally talked to us in 1967 and said he would try to get them for us,” he said. ”The combat aircrew wings, to me, is the highest award I could ever get.”